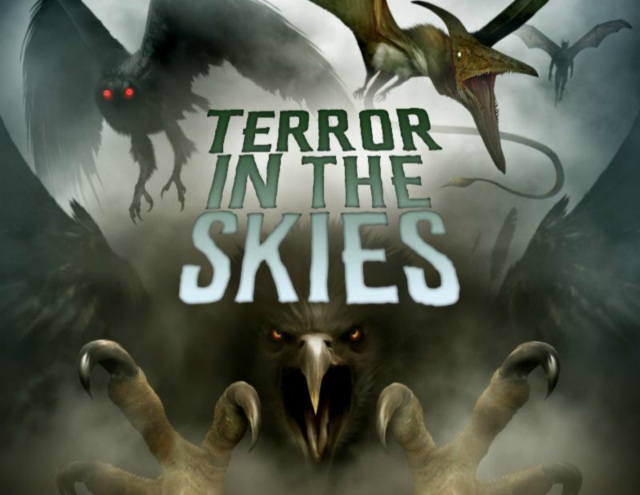 TERROR IN THE SKIES DVD

Illinois is known for it’s miles of prairie, and for being a state rich in history… but what if that rich history isn’t quite what you’ve been told? In this new film, from award-winning production company, Small Town Monsters, and director, Seth Breedlove, explore hundreds of years of terrifying reports of encounters with massive, winged creatures around the “land of Lincoln”. From Alton’s man-eating Piasa Bird legends to recent sightings in Chicago of a creature said to resemble Point Pleasant, West Virginia’s infamous “Mothman”, Terror in the Skies unlocks a centuries-old mystery.

Journey to the heartland of the midwest in this new documentary which offers a startling, in-depth look at an ongoing phenomenon. The feature-length film was shot around the state of Illinois in September and acts as much as a guide to the constantly changing terrain of the land as it does an introduction to a reality-altering subject. Breedlove contacted numerous witnesses and investigators who claim to have seen massive beings in the sky as recently as last year. One of the most recent, and popular stories to hit major media in recent years has been an ongoing wave of sightings of a red-eyed, shapeless creature dubbed, the “Chicago Mothman”; an event which is also covered in great detail in this film.

Terror in the Skies is narrated by author, musician and television personality, Lyle Blackburn. It is co-written by Seth Breedlove and Mark Matzke, with cinematography by Zac Palmisano, an original score by Brandon Dalo, and sound design by Jason Utes. SRV Films and Santino Vitale are handling VFX and the film contains original illustrations by Matt Harris and Brian Serway. The film is produced by Seth and Adrienne Breedlove. Authors, Loren Coleman and Troy Taylor are featured alongside numerous others.